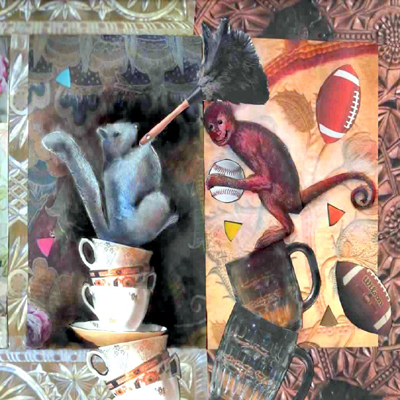 Unger and Madison are at it again! Florence Unger and Olive Madison, that is, in Neil Simon’s hilarious contemporary comic classic: the female version of The Odd Couple. Instead of the poker party that begins the original version, Ms. Madison has invited the girls over for an evening of Trivial Pursuit. The Pidgeon sisters have been replaced by the two Constanzuela brothers. But the hilarity remains the same.

DIRECTOR’S NOTES
Neil Simon is the world’s most successful playwright, so it would be silly to attempt to say anything new or clever about his work. Jack Lemmon (the original Felix in the movie The Odd Couple) described him this way: “Neil has the ability to write characters — even the leading characters that we’re supposed to root for — that are absolutely flawed. They have foibles. They have faults. But, they are human beings. They are not all bad or all good; they are people we know.” I think we all know a Florence or an Olive, probably we know someone who is just like all of the characters in The Odd Couple (Female Version). I first encountered this play more than a decade ago. I laughed out loud when I read it, and I am still laughing out loud at these characters and their “foibles”. I am confident our audiences will laugh out loud too, and it is a great pleasure to bring this comic masterpiece to Hendry Hall. Thanks Bill, for the lovely memories and the inspiration! – Karen Golden

PRESIDENT’S MESSAGE
Welcome to North Vancouver Community Players’ production of The Odd Couple (Female Version). This is our first production of the new season. Please be sure to pick up a brochure for our upcoming 2016-2017 season. We know that you will love the choices. If you are not already a season ticket holder, now is the time to sign up so that you avoid missing one of our wonderful plays! We hope that you will leave Hendry Hall tonight having enjoyed a wonderful evening of live entertainment. If you would like to join into the fun on and off stage, please check out our website North Van Community Players under the section Volunteer. We would love to have you aboard! – Fran Heaney