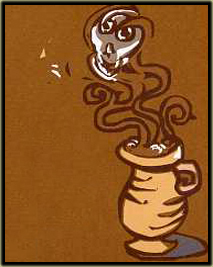 Nick Noir, private eye, has fallen on hard times. His botched last case has cost him whatever jobs may have come his way. Now he’s at the end of his rope and is forced to fire his devoted secretary Selma. That is, until a call from Coco Purvis offers a tantalizing case that just might pay off for Nick.

Coco and her sister, Bonbon, run Precious Perks Coffee Shoppe, which is known for its signature drink, Death by Chocolate. Unfortunately, the name came all too true for a fellow named Vinnie the Leech who died while drinking it one month earlier. Now, business has fallen off and the shop might have to close unless somebody figures out what happened to Vinnie.

Nick is immediately confronted by some pretty strange characters. Bobbie Sue, the waitress, warbles like a country singer who can’t carry a tune in a bucket. Bonbon is a sour, bitter woman who doesn’t like to stir things up. Her “twin” sister, Coco, is the exact opposite, a bubbly, homespun treasure. Henry, an old man who wears cross-trainers and hasn’t a wrinkle on his face, sits and watches all the action. Francois, more French than a bottle of Bordeaux, hides behind his newspaper. And who’s the woman dressed in black, including a veil that hides her face? A dowdy bag-lady type turns out to be a restaurant critic and a perky twenty-something suddenly starts paying attention to the old man. All these characters were sitting in these exact spots the night Vinnie the Leech fell over dead.

Though he fired her, Selma keeps showing up at opportune moments with tidbits of background information that help him piece together the puzzle, though he often gets the pieces in the wrong way. After a second death under the same circumstances as Vinnie’s (which had been caused by poison), and the disappearance of Bobbie Sue, Selma plays a psychic who—with the help of her ever-present Blackberry—reveals some deep secrets.

Armed with motives and opportunity for each suspect, Nick weaves his way through a lot of false deductions, but it all clicks just as a third murder is about to be committed. The motive for the murders? Money, of course—a lot of it, left to the twin Purvis sisters by an uncle they never knew they had. Nick earns kudos, and now maybe he can afford an office—and Selma.

Death By Chocolate is produced by special arrangement with Heuer Publishing 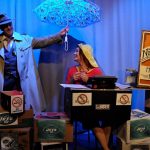 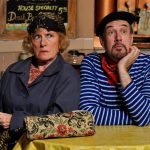 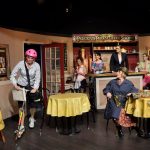 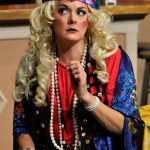 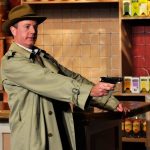 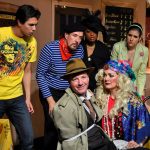 DIRECTOR’S NOTES
When I first read the script of Death By Chocolate I fell in love with it – it is so delightfully corny, and yet has so many possibilities, making it fascinating and challenging. Some of my theatre friends said it was a groaner. I hope that we have brought out the opportunities of infectious entertainment it provides with laughter rather than groans. The support from cast and crew has been superlative – that sounds like a cliché, but I can truly say this has been a rewarding, enjoyable and fun play in every part of its development. Thanks to all who have brought this production to fruition. – Clive Sanders

PRESIDENT’S MESSAGE
Welcome to the second production of our 2010/2011 season of wonderful live theatre! This play is sure to entertain and please you as the story unfolds with several twists and turns along the way. We are sure that your enjoyment will bring you back to many more plays here in the Theatre at Hendry Hall. Do spread the word to your family and friends and be sure to book your tickets for our annual Christmas pantomime, Beauty and the Beast, the proceeds of which will go to the North Shore’s Harvest Project – Sue Worrow