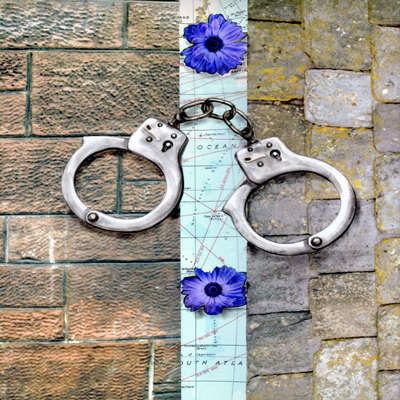 The two rooms of the title are a windowless cubicle in Beirut, where an American hostage is being held by Arab terrorists, and a room in his home in the United States, which his wife has stripped of furniture so that, at least symbolically, she can share his ordeal. In fact the same room serves for both and is also the locale for imaginary conversations between the hostage and his wife, plus the setting for the real talks she has with a reporter and a State Department official. The former, an overly ambitious sort who hopes to develop the situation into a major personal accomplishment, tries to prod the wife into taking umbrage at what he labels government ineptitude and inaction, while the State Department representative is coolly efficient, and even dispassionate, in her attempt to treat the matter with professional detachment. It is her job to try to make the wife aware of the larger equation, of which the taking of a hostage is only one element, but as the months inch by it becomes increasingly difficult to remain patient. The wife is finally goaded by unforeseen developments to speak out against government policy and, in so doing, triggers the tragic series of events that brings the play to its startling conclusion. In the end there are no winners, only losers, and the sense of futility and despair that comes when people of goodwill realize that logic, compassion, and fairness have become meaningless when dealing with those who would commit such barbarous acts so willingly.

DIRECTOR’S NOTES
What you are about to witness is not a news story. This is Lee Blessing’s play Two Rooms, written in 1988. That it could be today’s news story is both depressing and alarming. In the play Blessing spells out clearly and dispassionately the facts that very few Americans understood twenty-eight years ago – that Westerners and particularly Americans are loathed and despised by many people simply because of who they are. If that was all the play was about it would be very sad. But it’s more. It’s about devotion: to a cause; to a belief and, more importantly to another person . It is a profoundly beautiful love story. It is about four imperfect, average people thrust into a maddening and unjust situation over which they have no control. Under this kind of pressure, each of them makes mistakes as they try to cope, and each of them has moments of strength and heroism. Thank you to NVCP for bringing this important play to our theatre and thank you to the audience for taking the journey with us. – Stephen Torrence

PRESIDENT’S MESSAGE
Welcome to North Vancouver Community Players production of Two Rooms, which is NVCP’s entry into the Theatre BC North Shore Zone Festival. If you have friends or family who are unable to see this show at Hendry Hall, please let them know they can come to Presentation House Theatre on May 4 and you can see it again too! We hope that you will leave Hendry Hall tonight having enjoyed a wonderful evening of live entertainment. If you would like to join into the fun on and off stage, please check out our website North Van Community Players under the section Volunteer. We would love to have you aboard! – Fran Heaney