An Evening of One Acts 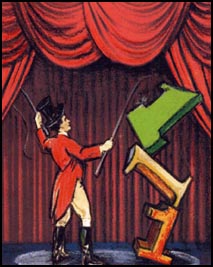 What Mildred Did! Play is by the author, no synopsis has been provided.

A Way With Words Life long friends, a writer and an accountant, meet for lunch once a year when the writer visits New York. The writer always asks how the accountant’s wife is and he always replies fine, until today when he admits they have been divorced for over a decade. He has heard rumors of strife between his ex wife and her current husband and he wants the writer to accidentally bump into her as she jogs in Central Park to see if there is any chance of reconciliation. The result is surprising, comic and moving.

Babel’s in Arms Two blue-collar Mesopotamian construction workers are handed a provocative task: Build the Tower of Babel—or else. How many stones does it take to get to heaven, anyway?

DIRECTOR’S NOTES
I was asked when I started this project, what the theme of the shows are. I quickly replied, nothing. They are just three shows I read and found enjoyable. But as we’ve spent time bringing them to life, I slowly realized the common thread. The power of words. It was Shakespeare who wrote quite famously in Hamlet, “And what do you read?”  “Words, words, words.” I’ve often wondered if this was a deep profound notation for the mundane words we droll over in text with no originality to be seen. Or maybe the Bard simply wrote this as a reminder to go back later and fill in a new soliloquy, but alas it was already at the printers!

So tonight we explore words.  From a time when all words have not yet been named, to those moments where our words fail in the moment or were never said at all and into a world where the written word affects lives more than we care to imagine.  With comedy as a backdrop, please enjoy a night of one acts … in two acts … including a two-act play, performed in one act. Enjoy!. – Nick Palidwor

PRESIDENT’S MESSAGE
And now for something slightly, if not completely, different!  Three one-act plays, three sets, actors in multiple roles, many laughs and an evening to remember.  What a way to begin our 2011/2012 season.   Season ticket packages will be available until Saturday, September 24 so call 604-983-2633 to order one for yourself and perhaps a friend or two. We look forward to seeing you again very soon in the Theatre at Hendry Hall.  Enjoy the show! – Sue Worrow