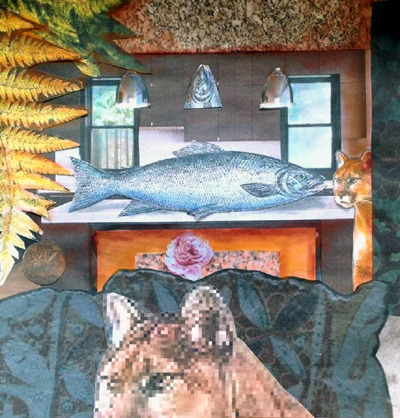 2000, set in the high-tech home of a childless-by-choice, professional couple living in the hinterlands of North Vancouver’s Lynn Valley, sees a cougar wandering down into the city and shifting their perspectives of the world. According to Joan MacLeod, the play 2000 grew out of a story she read about a cougar that had wandered into a sports arena in Vancouver: “I was intrigued by the notion of the wild invading the city and the city invading the wild, by the idea of things being not quite right in nature and the approach of the millennium.”

In the play, the cougar appears to embody the precarious and increasingly circumscribed state of nature. Living in the home with Sean and Wyn is her 99-year-old grandmother, Nanny, who believes there is a mountain man lurking around the property. Each character relates to nature in a different way, whether it be with distrust, cynicism, awe or longing. The figure of the Mountain Man, a homeless man who has abandoned all of his civilized ways, even speech, to live among the animals of the forest, provides a meeting ground between humanity and nature. Like the cougar, increasingly crowded by a rapidly encroaching civilization, he scavenges what preciously little remains of the beautiful animal in all of us.

2000 will be part of the Theatre BC North Shore Zone festival of plays at Presentation House Theatre May 7-13, 2017. This annual week of theatre showcases plays presented by groups from Deep Cove to Squamish and all points in between. Established community drama groups will present plays from their seasons, alongside a secondary school, showing us the skill and talent of our up-and-coming thespians. The Festival Committee is thrilled this year to have that eminent theatre professional Kathryn Shaw from Studio 58 to adjudicate the productions. It will be a true learning experience for everyone involved and attending. NVCP will be presenting the comedy/drama 2000 as part of this festival and encourages all Hendry Hall patrons to come and support their entry—for a full line-up of productions. See Presentation House Theatre. Come and support your favourite club in this annual event.

DIRECTOR’S NOTES
“Concession workers [in the Pacific Coliseum] discovered a hungry cougar roaming the mezzanine.” Joan MacLeod’s brilliant and evocative play 2000 introduces us to a family in turmoil, situated between the polar axis of the urban and natural worlds, perched on the edge of the new millennium. It asks us where our loyalties lie: with our true nature or the polished image we publically project. Throughout the play, a cougar embodies the precarious and increasingly circumscribed state of nature. According to Joan MacLeod, her play 2000 grew out of a story she read about a cougar that had wandered into a sports arena in Vancouver. “I was intrigued by the notion of the wild invading the city and the city invading the wild, by the idea of things being not quite right in nature and the approach of the millennium.” It has been said that Joan MacLeod’s work is “like the tide coming in”. Gentle at first, its impact becomes overwhelming. So sit back and let the waves wash over you. – Stephen Torrence

PRESIDENT’S MESSAGE
Welcome to North Vancouver Community Players production of 2000. This play is our entry in the Theatre BC North Shore Zone Festival. If you have friends or family who were unable to see this show at Hendry Hall, please let them know they can come to Presentation House on May 11 and you can see it again too! We hope that you will leave Hendry Hall tonight having enjoyed a wonderful evening of live entertainment. If you would like to join into the fun on and off stage, please check out our website North Van Community Players under the section Volunteer. We would love to have you aboard! – Fran Heaney